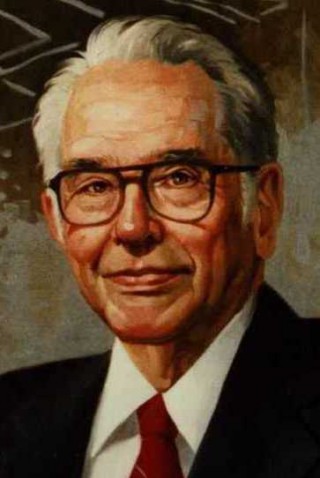 John Vincent Atanasoff was born on 4 October 1903 a few miles west of Hamilton, New York. His father was a Bulgarian immigrant, Ivan Atanasov. His last name was changed to Atanasoff by immigration authorities at Ellis Island when he arrived with his uncle in 1889, and later was changed from Bulgarian Ivan to English John.
His mother’s name was Iva Loosen.She was a math teacher. John Atanasoff’s school years passed very ordinary. He soon became interested in mathematics. With the help of his mother he was taught college algebra by W. M. Taylor. When John Vincent apply to college, his family moved to a farm in the town of Old Chikora, Florida.
He graduated High School in Melbourne for two years with honors in natural science and mathematics.
In June 1926 John received a master’s degree in mathematics at the Higher State College in Iowa and a few days later, he married Lura. Same school hired him to teach mathematics.
In the fall of 1930 he joined the faculty of Iowa State College as assistant professor of mathematics and physics. Obsession to find herself permission of computer problem led him to madness during the winter months of 1937. In September 1939 Atanasoff left Ames, Iowa and Iowa State and went to work at a military laboratory in Washington. He planed to work there for a few months or years and then return to Iowa campus.
In 1949, he became Chief of Army specialist at Fort Monroe, Virginia. After one year he returned to Washington as a director of the program in coastal defense naval laboratory. He was a Vice President and Press-officer of Iowa State University. Charles Hamilton gave the idea to make a film about the invention of the computer Atanasoff-Berry. The film “From man John Atanasoff” was completed in 1981.